It is such a pity that the flawed administration in the White House aggravated its flawed approach to responsible governance by choosing not to reappoint Janet Yellen to Chair the US Federal Reserve.  On the first day in office of her successor, Jerome Powell (whose policies were not expected to be a significant departure from hers) the stock market went into a nose dive of record proportions.  There were many reasons for this turbulence – bond prices were up, wages were up, inflation fears, bonuses to workers in major corporations as part of the “benefits” of corporate tax reform – many possible factors have been cited. What if?  What if Janet Yellen had not been displaced?  Might the very continuity of her presence have helped to calm things down?  END_OF_DOCUMENT_TOKEN_TO_BE_REPLACED

Warm greetings to you for a happy and peaceful holiday season.  We are taking this opportunity from Villa Ndio to celebrate the small victories of collaborative efforts – the political inroads for positive change in Virginia and Alabama and yes, even here in France.  The shock and embarrassment of the US Presidential election result in 2016 continue to haunt us, but we are inspired to look to 2018 with these signs of change.  We are also hopeful that the cultural shift in addressing sexual harassment will in fact take hold. 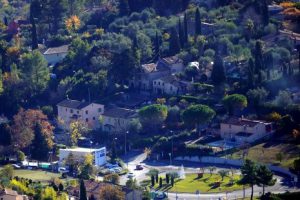 END_OF_DOCUMENT_TOKEN_TO_BE_REPLACED

Reflections on the ACLU: It would take me a while to search for the legal history on which case it was that Ruth Bader Ginsburg criticized the timing of in the context of what I came to understand was a carefully crafted legal strategy during an ACLU Board debate on the ACLU’s Women’s Rights Project. Sometime in the 1970s – perhaps 1973? It was a case, she argued, that disrupted that strategy to build towards an interpretation of the 14th Amendment through case law that could essentially eliminate the need for an Equal Rights Amendment. Something to do with Oklahoma sticks in my mind.  As a new member of the ACLU Board by virtue of being a representative from the North Carolina affiliate, I remember being amazed by her stance and awestruck by her sophisticated arguments. It was quite a lesson in how constitutional law can be influenced by a deliberate strategy – not just through one case but through a series of cases if they are deliberately chosen and sequentially developed to move the judicial interpretation in a certain direction. Here are some reflections on a dramatic change in ACLU strategy today, but I start with a historical perspective.

END_OF_DOCUMENT_TOKEN_TO_BE_REPLACED

I have long been a defender of civil liberties for all groups, as long as they do not condone or engage in violence, but we were horrified by the evil on display in Charlottesville, Virginia. And we were further offended by the damage of a failed American president whose words and behavior were so lacking of a moral compass to condemn in no uncertain terms the fundamental evils of what these groups were advocating – and doing! To suggest that there were “fine people” on “many sides” of this confrontation is shocking, indeed.

END_OF_DOCUMENT_TOKEN_TO_BE_REPLACED

The American Civil Liberties Union, of which I am a member, has a broad view about free speech, on the premise that it is only through freedom to speak as one chooses that flawed views can be effectively discredited. However, I do believe that the “Antifa” movement or the anarchistic groups against globalization who have mobilized groups and individuals to engage in destructive acts are a challenge to deal with. The idea that one has the right to oppose an abhorrent view with violence is contrary to the basic right of free speech, even where the abhorrent view is itself against that right. It is frustrating that these groups and/or individuals have infiltrated peaceful protests. Seattle in 1999 comes to mind, but also Geneva in 2004 among protestors against the G7 Summit in nearby Evian that year, or the G20 protestors in Hamburg this year. On the other hand, these are not advocates of the kind of racist, xenophobic and neo-Nazi views that we have heard from the groups that marched so aggressively in Charlottesville.