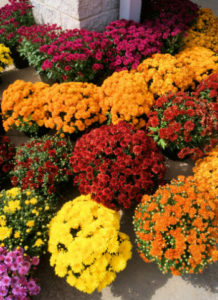 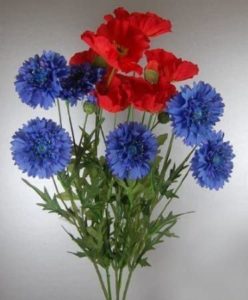 The month started with All Saints’ Day and All Souls’ Day. For the first time, I decided this year to honor the occasion in the French way. “Toussaint” happened just after the official beginning of the second lockdown. President Macron appeared on television on Thursday evening to explain the reasons for the lockdown. He said that there were more new cases of COVID-19 the day before than on any day since the pandemic came to France. His main concern was to ensure sufficient capacity to care for the patients who were filling the hospitals and clinics across the country. He announced that the lockdown would begin on Friday, 30 October, but then he said that there would be an exception for activities related to Toussaint.  As an American, I think I would have been surprised by this waiver of lockdown rules if I hadn’t learned from you how important this holiday is here in France. In the United States, it is not a holiday.

In fact, Halloween is more important in the United States than All Saints’ Day, although it is also not an official holiday either. The American custom, however, is for children to dress up in scary costumes as goblins or ghosts or witches. The children then go door to door asking their neighbors “Trick or Treat”. Most of the time the neighbors give them some candy or fruit. Families also buy  big orange pumpkins and carve them with funny faces. They put candles in them and place them on their front porches. Here below is a picture of the carved pumpkins at my daughter Kristina’s home this year in Richmond. Although there is no lockdown order there, the trick-or-treating was cancelled in most places on account of the pandemic. 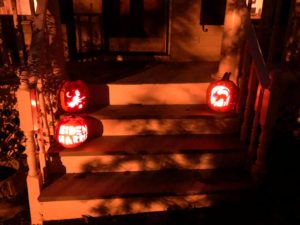 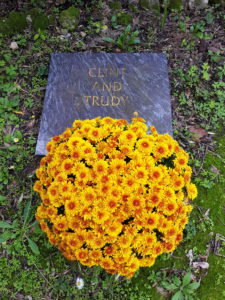 Here in France we have celebrated Halloween with our children in the past, but we did not celebrate Halloween this year. Instead, we decided to do something for Toussaint. Ralph’s parents lived next door to us here for many years. They both died in 2012. There were no funeral coffins to bury because they were cremated, and their remains were placed in urns. However, the family did want to have a plaque in their name, like a tombstone but not in a cemetery. The marble plaque was placed in front of a stone bench in their garden. When their home was sold to people outside of the family, we moved the plaque to our yard. This year for the first time we decided to place a chrysanthemum plant in front of the plaque for Toussaint.  See above a photo of the chrysanthemums. It was a soothing experience for Ralph and me to honor his parents this way.

The month of November is an appropriate time to remember and honor our departed family members but also the martyrs and saints throughout history. After all, it is the month when the harvest has ended. And on 11 November, Armistice Day, it is the time to honor all those who have died for France (or for England or for the United States or any country). The Armistice officially ended the fighting in World War I at 11 am on 11 November 2018, although the final treaty was not signed until 2020. The day has come to honor those who died as well as all veterans in World War II and all other wars since then, and not just World War I. The day still includes two minutes of silence at 11 am in honor of its origins.  In addition, the bluet or cornflower is the floral symbol of Armistice Day in France because of its association with the blue uniforms of the French recruits who fought in World War I.  Paper cornflowers in France and red poppies in England are still worn on 11 November to honor the dead. This year, President Macron will honor the dead at the Tomb of the Unknown Soldier which is located under the Arc de Triomphe in Paris. Look for the blue cornflower on his lapel.