It was an impromptu afternoon in April. The US Representative John Lewis and the French President Emmanuel Macron caught everyone by surprise as they showed up unannounced at the Martin Luther King, Jr. Memorial, walking leisurely together and chatting over the inscriptions on the walls there. That was in 2018, when the two had instantly warmed to each other on the occasion of President Macron’s address to a joint session of Congress. The spontaneity in their new friendship had led the President to ask Representative Lewis for a tour of the Memorial on that warm springtime afternoon. No wonder, then, that President Macron was so personal in expressing his condolences over the passing of this civil rights icon on July 17. As I reflect on my own memories of John Lewis’ legacy, I am heartened by this connection to President Macron.

Although I do not recall ever meeting John Lewis myself, I had followed and admired his steadfast and humble dedication to non-violence in the American civil rights movement. We probably came close to crossing paths in 1990 and 1991 when he was a relatively new member of the US Congress from Georgia (having been first elected to the House in 1986). This year of 1986 appeared to be the beginning of a long overdue influx of African-Americans elected from Southern states as a powerful result of the Voting Rights Act of 1965. This was, in fact, the very law that had finally been enacted following the courageous leadership he and others had shown on voter education drives in the South. And in 1990 and 1991, he was instrumental in enacting yet another civil rights bill, one in which I played a small part. But that 1991 act was only one of his many accomplishments.

Perhaps his most famous accomplishment was his participation in the 1963 March on Washington for Jobs and Freedom. As I have frequently reminisced, I was an enthusiastic observer of this March, sitting in front of a television set with my mother way off in Edina, Minnesota. It was for me – as for so many others – a memorable event. “I have a dream…”, we heard, and “We shall overcome…”, we sang. The speeches and the songs and the crowds and the setting were all so powerful and inspirational. And it was a thrill to hear the Rev. Martin Luther King, Jr. in person a couple of years later when he delivered the commencement address at my graduation from Oberlin College in 1965.

Little did I know, then, about the details of the different organizations that had come together for that 1963 March on Washington. I knew about the sit-in demonstrations and the Freedom Riders because there were Oberlin classmates who participated – and later returned to rebuild burned-down churches. But these required parental permission for students like me, and there were plenty of us whose parents weren’t willing to place their children in harm’s way. I have often wondered how the ones who did go got clearance to do so.

I was reminded of those days only recently – and serendipitously – when I went to see a French exhibit entitled “MLK Aprés 50” in Grasse, France. That was actually almost two years ago!  It was on the occasion of the 50th anniversary of the Rev. Martin Luther King, Jr.’s death – an exhibit that toured France in 2018, sponsored by the Protestant churches in France (yes, there are a few) . I was very impressed with the exhibit – and wrote a musing on the exhibit  and its links to Martin Luther! (See the musing here.)

The exhibit was a collection of large posters documenting the history of the American civil rights movement and the pivotal role of Martin Luther King, Jr. But it also contained details of the various organizations – the “Big Six” in particular that came together for the March on Washington. The photograph of “Les Leaders de la Marche” caught my eye, and even then I noticed the young John Lewis among them.  There he was, only 23 years of age, representing the Student Nonviolent Coordinating Committee (SNCC), the organization that had recruited so many of my Oberlin classmates. The other organizations listed here are worth noting – the Southern Christian Leadership Conference (SCLC), the Congress of Racial Equality (CORE), the National Association for the Advancement of Colored People (NAACP), the National Urban League, and the labor union known as the Brotherhood of Sleeping Car Porters. They were, indeed, the “Big Six” of the civil rights movement. 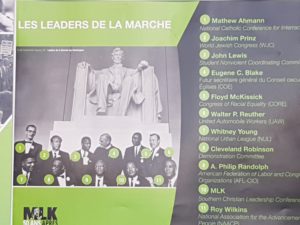 Since going through this exhibit, I have enjoyed reading more about the role that John Lewis played in all of this. Apparently, he was the most radical of the speakers at the 1963 March. Instead of his initial plan of speaking against President Kennedy’s civil rights bill as too weak, he was pressured to change his prepared remarks and ended up endorsing it – with reservations. But we still heard him say, “We want to be free now.”  Prior to the March, he had established his reputation for courage as one of the original Freedom Riders. And subsequent to the March on Washington, he was a key player in mobilizing the non-violent campaign for voting rights in the famed Selma-to-Montgomery marches in early 1965. His commitment to non-violence held firm, even when he was frequently arrested, endured severe beatings and even had his skull broken by the white resistance that these actions encountered.

I also understand that a faction opposed to the non-violent strategy maneuvered the SNCC to endorse a more militant position that contributed to John Lewis’s separation from SNCC. It was even renamed the Student National Coordinating Committee as it pulled away from the non-violent principles of its student-based founders, like John Lewis. This redirected SNCC, however, did not last long and eventually folded in 1969.  But unlike the message in the MLK Après 50 exhibit that implied the fizzling out of the civil rights movement after the death of Martin Luther King, Jr., we all know that it had its continued momentum, even if a somewhat undulating momentum.  Perhaps, as some would argue, if the moral power of non-violence had held on more strongly, it would have seen more changes more quickly.  But we do know that John Lewis himself remained a passionate leader of both civil rights and non-violence.

Without dwelling at length here on the history of the civil rights movement since the 1960s, I mention only that I was there in 1990 and 1991 and played my own bit part in the passage of the Civil Rights Act of 1991, the legislation that Representative John Lewis was a leader in the US House of Representatives to enact. The legislation essentially overturned a series of unfriendly Supreme Court rulings on employment discrimination but also helped to clarify the parallel protections for women’s rights as well as civil rights. With a business community that mostly opposed the legislation, I persuaded my then employer AT&T and others at The Business Roundtable to meet with the civil rights and women’s rights organizations in search of common ground. The bill that eventually passed in 1991 tracked the language of that joint effort.

The decades since then have not been the greatest. The transformation of the Republican Party into an ideological extreme on the right is more clearcut than the complaints about “identity” politics that have come to dominate the Democratic Party. But both phenomena have hurt the capacity for governing together. And, in spite of a flowering of Black history, literature and the arts,  frustration has festered over growing racial inequality – systemic racism in law enforcement, criminal justice and a growing Black prison population, and continuing barriers to equitable health care, education, jobs, and housing.

In these years, Representative John Lewis came to be known as the “conscience” of the US Congress.  He was in the forefront of protests for gun control laws as well as civil rights, and even in his last appearances, he stood up for Black Lives Matter and the spreading movement for change. And back in April 2018, as one of the Democratic leaders in the House, he welcomed President Emmanuel Macron on his historic visit to Washington, DC. 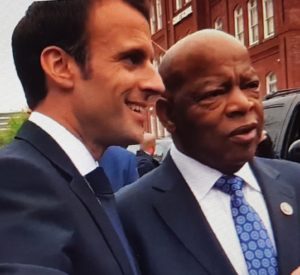 The spontaneous afternoon visit to the Rev. Martin Luther King, Jr. Memorial was quite a show of immediate rapport between the two. 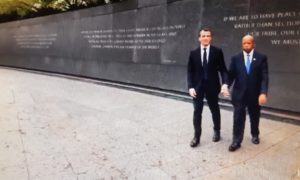 It is not surprising that President Macron was among the most visible of world leaders in expressing his condolences upon the passing of John Lewis on July 17, 2020:

A  life fighting for civil rights. A life being part of all the good fights, battling for a fairer world….A lifetime of getting into “good trouble”, of fighting for a world that is more just. A true hero. Indeed, “because of you, John.”  Thank you, President Macron.