The prospects of “vaccine nationalism” are an alarming development for COVID-19.  They are aggravated by the looming US-China divide but also by the lack of global leadership from the US for any alternative to it.  These aggravations are hurting the potential for the World Health Organization (WHO) to enable a form of “vaccine multilateralism”.   But one can still identify some countervailing signs from an initiative known as the ACT-Accelerator initiative and its vaccine development pillar.  More public awareness needs to be mobilized in support of this initiative – and in support of vaccine multilateralism generally. The message has to be – and can be – that “We’re only safe if we’re all safe”.

The pandemic crisis is suffering from the “go-it-alone” mentality of vaccine nationalism, especially aggravated by the countries that are able to control the research and development of potential COVID-19 vaccines  – India, Russia, the US and China. The worst of these is the US, since we have all looked to the US for global leadership in past pandemics. Not only is the absence of the US on the global level leaving a leadership vacuum, but it is also disrupting the capacity of international organizations like the United Nations or the World Health Organization to mobilize a global response. Even the G20, which has had a sympathetic leader in this year’s presidency, none other than Saudi Arabia, has been hobbled by the US.

Media attention has understandably been directed at these inadequacies. The latest issue of Foreign Affairs, a journal published by the US-based Council on Foreign Relations, includes a series of articles around the theme of “The World After the Pandemic”.  This series of articles has highlighted the weaknesses of the WHO and the UN and even the G20 in dealing with the pandemic. The prognosis for the world after the pandemic is indeed bleak. And yet, one should look beyond these limitations for encouraging signs of global collaboration, especially as witnessed by the show of support for the ACT-Accelerator initiative. As a member of the Council on Foreign Relations, I am encouraging the Council and other important voices on the global scene to be an advocate for this initiative – and for vaccine multilateralism.

While the UN is spearheading a humanitarian effort to raise $10.3 billion for COVID-19 relief, and the G20 is working on far-reaching debt-relief (or at least debt-delay) for the hardest hit and poorest economies of the world, the WHO is where the spotlight needs to be directed in terms of managing the coronavirus crisis itself.  In spite of the US withdrawal process that President Trump triggered in early July, the WHO continues to be the pivotal agency for mobilizing resources and commitments for a truly global coronavirus response. This has taken the form of the Access to COVID-19 Tools (ACT) Accelerator, a massive undertaking to accelerate development, production and equitable access around the three pillars of COVID-19 tests, treatments and vaccines.

As reported in my previous commentaries, the WHO was not alone in launching this initiative.  In fact, it has benefited from fund-raising efforts that  have essentially operated outside of the WHO framework. Co-hosts for the April 2020 launch included the President of France, the President of the European Commission, and the Bill and Melinda Gates Foundation.  Since then, and following a number of pledging summits in May and June, some 40 countries and organizations have joined the initiative – plus lots of individuals and private sector entities.  The latest financial tally (available here) is that  pledges have reached €15.9 billion!

The  ACT-Accelerator initiative is specifically dedicated to global equitable access in three priority areas – testing and treatment, as well as vaccines.  It has nine governmental partners (the European Commission, Canada, France, Germany, Italy, Japan, Norway, Saudi Arabia, Spain and the UK) working with the WHO, the Bill & Melinda Gates Foundation, the World Economic Forum and the Wellcome Trust. Their oversight provides the political guidance, while a Delivery Partners Group will concentrate on implementation. See the chart below (available here): 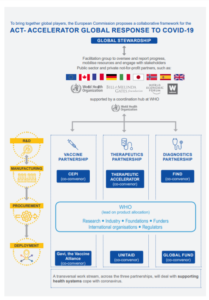 The focus in this commentary is on the first of the three priority areas – the Vaccine Partnership.  While the WHO has a supporting role for the overall initiative, this pillar of the initiative is co-convened by the Coalition for Epidemic Preparedness, founded in 2017, and GAVI, the Vaccine Alliance, founded in 2000.  CEPI is a relatively new partnership concentrating on vaccine development, while GAVI, the Vaccine Alliance has proven its value over 20 years in leading vaccine distribution to the poorest economies of the world. Both are global multi-stakeholder initiatives; and both work closely with the WHO but also with the Bill and Melinda Gates Foundation, the World Economic Forum and the Wellcome Trust.  (Both, by the way, are headed by prominent American scientists/public health experts – Seth Berkley at GAVI and Richard Hatchett at CEPI.)

Together, CEPI and the Vaccine Alliance have launched a new “COVAX Facility”. (See the latest announcement on the COVAX Facility here.) The purpose of this Facility is to guarantee participating countries a share of doses whether they are in a position to pay for it or not. For starters, there are 90 developing and emerging economies with whom the Facility will have a burden-sharing arrangement, with a graduated scale for a local budgetary share based on the country’s level of development.  But the Facility is also open to all other countries, of which 75 have already conveyed an “expression of interest”.

These countries are encouraged to negotiate how they would participate. The CEPI/GAVI priorities would apply to all participating countries. Vaccine doses will be allocated in proportion to populations, with priority to health care workers and then expanding to reach at least 20 per cent of the higher-risk population and then on a needs basis more broadly. Several G20 countries have actually expressed interest in this – including Brazil, Canada, Japan, Mexico, Saudi Arabia (the current President of the G20) and the United Kingdom. CEPI has reported on the impressive turnout of interest here. Interestingly, a few other European countries have also shown an interest – Norway, Portugal, Monaco, Switzerland and some others.

The COVAX Facility aims to purchase 2 billion doses of COVID19 vaccines by the end of 2021. It also has an Advanced Market Commitment (AMC) component for negotiating a pooled and lower purchase price with specific manufacturers.  The goal is to have this AMC component financed initially by $2 billion in contributions – in addition to the funds that are coming through the ACT-Accelerator initiative.

It is interesting to note that the first commitment for the COVAX Facility’s AMC, for the pre-purchase commitment of 300 million doses, was announced in June with AstraZeneca in collaboration with Oxford University.  This particular collaboration appears to be the farthest along of Western-based potential vaccines. The US has negotiated a pre-purchase agreement with this same group for 300 million doses. The prospects are encouraging for this COVAX Facility to mobilize the equitable distribution of COVID-19 vaccines. One can hope that more vaccine developers and manufacturers than the AstraZeneca vaccine will participate in this approach to vaccine multilateralism.

With the US, China, Russia and India all doing their own development of vaccines – and staying out of the COVAX Facility, does this make the COVAX Facility more of a European initiative? (China, by the way, is a token member of the ACT-Accelerator – listed as having pledged €45 million.)  After all, the bulk of the €15.9 billion for this initiative is coming from the EU, the European Investment Bank and EU countries. Does this mean that the European Union is throwing its full weight behind a multilateral approach?

Unfortunately, it seems that a form of vaccine nationalism has crept into this setting as well. It started, or at least it publicly started, with the announcement in June of a new “Inclusive Vaccine Alliance”.  This is strange nomenclature for an agreement reached between just four health ministers – those of France, Germany, Italy and the Netherlands! This was a deal to pre-purchase 400 million doses from none other than AstraZeneca! And these four European countries, reportedly dissatisfied with the slowness of the EU bureaucracy, have joined together for their own pre-purchase agreement – AND for the benefit of their own citizens! (See the official French press release on this new alliance here.)

To be fair, the Alliance does state that these four countries are working together in order to “secure supplies for the European population under conditions which also allow fair access to the vaccine for all countries.” And further they “wish to ensure a fair price for the vaccines, enabling global distribution for the benefit of the poorest nations too, including in Africa.”  But the agreement does specify a priority for development and distribution of a vaccine “for Europe’s population and beyond”, without specifying that there might be non-European priorities. This is, therefore, supportive of a global distribution but only after Europe is taken care of.

The ramifications of this are daunting. It would seem that no country is prepared to give up the priority of taking care of its own citizens first. It may be that the best one can hope for is this European approach –  emphasizing a fair price for everyone and pooling as much negotiating strength as possible to achieve that objective. But in this setting, “vaccine nationalism” still prevails. These Alliance members are reportedly working on broadening their approach to an EU-wide one, but still one that puts a priority on delivering vaccines to Europeans first.

That said, it is still important to highlight the multi-stakeholder nature and global focus of the ACT-Accelerator initiative and its implementation on vaccines through the proposed COVAX Facility. This is not the same as the EU-focused initiative, but it may even be a preferred alternative there. After all, almost all of the other EU countries besides the big four have expressed interest in participating in the more global prioritizing approach prescribed by the COVAX Facility. And it’s good that both Canada and Mexico have shown interest in this, as well as Japan and Korea and even the G20 President Saudi Arabia. The potential is there for this alternative to prevail.

We live in a highly frightened environment. The US and China are big players who are essentially outside this multilateral effort; Russia and India are also operating on their own; and the rest of the world has to manage a multilateral vaccine policy without them.  The major European powers may display their own form of vaccine nationalism, and I can understand why even strong advocates of vaccine multilateralism can’t afford to lose their base of support.  But we all need to be more vociferous in our support of the multilateral effort.  This pandemic is clearly a situation where “We’re only safe if we’re all safe”.  So let’s speak up for vaccine multilateralism!

NOTE on the Series

This series of commentaries has been promoting a political lens on the COVID-19 pandemic – in parallel to the scientific lens. The understanding is that science should drive our behavior because of the unexpected spread and severity of the pandemic across the world. We need to know what this virus is doing to us and how we can protect ourselves from it.  But here, in this series of commentaries, the argument has been that we need more than science to guide our global policy deliberations. We need a rational political lens, too.  This political perspective is even more urgent now that we are seeing the disruptive signs of vaccine nationalism at the expense of vaccine multilateralism.

There are, to be sure, deleterious effects when the application of a political lens ignores the scientific one. When the political lens is used with an anti-science mindset, it reinforces the bravado and fear of nationalistic populists.  Nonetheless, even with the appropriate deference to a pro-science mindset, the policy-making process needs the perspectives of the political scientists, the philosophers, the ethicists, the humanists, if not also the globalists, the multilateralists and even the transcendentalists to guide us along with the scientists.

One Reply to “The Political Lens on COVID-19: Time for Vaccine Multilateralism”