Most of the war memorials in the region are community-based and list the names of the men from the community who lost their lives in that war. This one, though, is unusual. At the Carrefour de la Liberté, there are TWO memorial stones – one honoring local losses and the other specifically honoring the Allied Forces (US and Canadian but also British) who liberated the town and the region from the Nazi and Fascist occupation on 23 August 1944. And this memorial stone is in both French and English!

We have often stopped at the memorial on our daily walks – it is just downhill from where we live on the other side of the traffic circle. The main memorial stone relates to the local losses, but we have reflected on the writing on the second memorial stone. The heading of this memorial stone is In French: “IN MEMORIAM, AUGUST 1944.” And it continues in French to say: “A LA MEMOIRE DES SOLDATS DE LA FIRST SPECIAL SERVICE FORCE TOMBES EN PROVENCE”. But then In English, it says: “IN MEMORY OF THE SOLDIERS OF THE FIRST SPECIAL SERVICE FORCE FALLEN ON THE PROVENCE COUNTRY”.

Imagine our surprise and delight this past 23 August 2017 to come upon a charming memorial ceremony to honor this “First Special Service Force” – replete with US, Canadian and British flags at the memorial and an array of World War II vehicles parked around the Carrefour de la Liberté. We had heard a lot of unusually loud traffic noise from our bedroom window at 5 am but only realized what it was all about later in the morning when we heard the sounds of a quartet playing three bagpipes and a drum. It had become a brilliant summer day with a clear blue sky when we rushed down from our home to join the growing crowd of spectators as they mingled with the local dignitaries in anticipation of the event. It was indeed a colorful sight with the three “Anglo” flags in prominent position, supplemented by a scattering of French flags and six large ceremonial flags held by what appeared to be very elderly veterans.

The traffic circle is situated at the entrance to the small village of Peymeinade, although it is adjacent to the larger town of Grasse. As we learned later, the ceremony featured the local and national officials from both Peymeinade and Grasse. But they were there to recognize the liberation of the region by the Americans, Canadians and British who fought along with the Free French forces in the second invasion of France in August 1944, “Operation Dragoon”, following the Norman invasion in June 1944. So in addition to the local dignitaries wearing medals and red-white-and-blue sashes, there were men and a few women dressed in WWII regalia, while others represented the local and national gendarmerie in their crisp and formal attire.

The ceremony was long but fascinating. There were multiple political speeches describing the invasion itself and its significance for the liberation from the repression of Nazism and Fascism. Large bouquets were formally laid by groups of dignitaries before the two memorial stones. All four national anthems (Star-Spangled Banner, O Canada, God Save the Queen and La Marseillaise) were played as people stood at attention. And the conclusion witnessed a parade of WWII jeeps and trucks with flags flying and horns honking, moving from the traffic circle through the village of Peymeinade and eventually even to the streets of Grasse.

What was especially striking about this ceremony was the clear understanding shared by all who were there that this was all about liberation. Liberation from repression and war, to be sure. But more fundamentally, liberation from the evils of an ideology that was diametrically opposed to democracy, freedom for all peoples, and inclusiveness. There was no mention of “nice people” on both sides. It was liberation for the sake of freedom pure and simple. Speakers even touched on the implications for today. Liberation enables us to resist terrorism in all its forms, to respond inclusively to all humanitarian crises and to oppose racism, xenophobia, anti-Semitism and Islamophobia. Thus, we were invigorated by this clear contrast to the terrorist attacks and provocative chants of neo-Nazi bigotry, white supremacy, racism and anti-Semitism coming out of the recent “Unite the Right” rally in Charlottesville, Virginia.

See the memorials at the Carrefour de la Liberté. The flags have been removed, but look for them again next August! 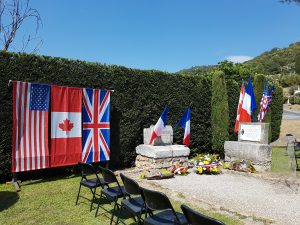