The televised recycling of the shocking murder of George Floyd confronts us with the challenge of personal responsibility. As American expats living in France, we are grieving this horrifying example of racism in the culture of our home country. The grief draws us to so many other tragedies like it – in isolation but not in inaction. We are working it out in our own minds what to do. In my case, the grief is heightened by my personal knowledge about the place where George Floyd was murdered: Minneapolis.

I was born in Minneapolis. I lived there. I used to go with my parents and my sisters to the Scandinavian restaurant with the all-you-can-eat buffet on Lake Street there. The bus from home in suburban Edina to downtown Minneapolis went past that same Lake Street. My godparents lived near there and sent their children to the fully integrated BIG Central High School. I watched the historic 1963 March on Washington on television with my mother there.

Well, the shock has confronted all of that. Homogeneity? Everyone is equal? Well, there is an element of conventionality – everyone is a progressive and everyone is alike – that probably operated as a sort of wall to diversity. We can all live together as long as we all live in the same way. All are welcome to the homogenizing community.  The same rules for everyone – that is to say, the rules of the overwhelmingly dominant group for everyone.

Perhaps I did not know that this, too, had a racist underpinning. In fact, if one scratches the surface a bit, there were those  rather quaint  stories of how even the Swedes were discriminated against. The mansion on Park Avenue that a successful Swedish immigrant built to become a part of the social elite of the city but was shunned by those very non-Scandinavian elites. As I was growing up, this mansion had become the “Swedish Art Institute” with guided tours featuring the sad tale of the never-used ballroom and the elaborate imported porcelain stoves in each room. And when the Scandinavian immigrants eventually learned to “Americanize” themselves, I suppose that they, too, learned how to discriminate.

As I was growing up (proud to announce that both of my parents had split heritages – i.e. half Norwegian and half, Swedish), we assumed that we were all Americans – no more Norwegian or Swedish spoken in the home – but still living in a very comfortable Scandinavian-American kind of American culture that was open to everyone. A homogeneity of progressivism that welcomed any and all into the cloister, but so overwhelmingly dominant that there was no space for anything else. And the assumption was that everyone had the same history before coming to this world of opportunity in Minnesota and could therefore become as easily Americanized à la Minnesota as those who had settled there in the first place. (Well, not the first, but that is yet another complication!)

Upon reading commentaries of how Minneapolis today is one of the most unequal of cities in the US, with the sharpest racial division in economic terms, and with ghettoized neighborhoods as bad as one finds in the South, I went searching. I was stunned to learn about the Minnesota project “Mapping of Prejudice”. This project, initiated in part by people like me aligning themselves with those whose families endured being excluded, has been mapping how restrictive covenants on home ownership became the vehicle for segregation in the city of Minneapolis. Here is a typical map of the area around Lake Nakomis. 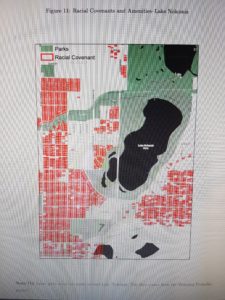 The PBS documentary, Jim Crow of the North features this project and shows how this segregation was aggravated further by the spread of these covenants to suburban housing developments just outside of Minneapolis, in places like Edina and Richfield and St. Louis Park. All part of the same county, Hennepin County, but conveniently in separate municipal boundaries.

What a shock to learn that the warranty deeds for the suburban Edina homes that my parents bought in the 1950s and 1960s probably contained racist restrictive covenants. Here is an early map of Edina’s covenants, drawn from the Mapping Project. 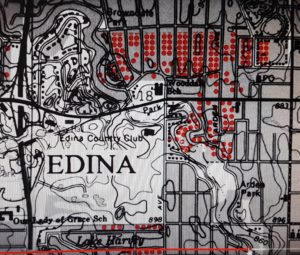 Given what I have heard about the complexity of removing these covenants and the abundance of fine print in most warranty deeds, I would assume that my parents simply didn’t know.  I can’t imagine that they would have signed off on such a segregationist maneuver. These clauses might not have been enforceable (the point of the 1946 Supreme Court decision), and even might eventually have been contrary to the fair housing laws that eventually passed in the 1960s. But they are probably still there! At least in the historical records! And certainly, their effect on establishing a pattern of racially segregating home ownership can still be found, even in a place like Minneapolis! INCLUDING in a place like Minneapolis!

Well, the leading issue today may be on reforming police conduct. And we are ready to support far-reaching reform initiatives in this area, whether it is in the US or France. But the pervasiveness of racism in our respective cultures calls for more.  I left Minnesota because it was too homogeneous – nicely progressive but overwhelmingly a dominant culture. Prairie Home Companion, Paul Bunyan and the Blue Ox, and all that stuff. I wanted to see the rest of the world, even as I was proud to have come from that culture. What a revelation that it, too, has its flaws – that progressive but dominant culture. And seeing more clearly the lives of people that aren’t part of that dominant culture – that are sharply there but not there. Right there in Minneapolis.

Well, I  am long gone from there and only have recollections of the place that are now decades old and outdated. It’s like the lutefisk that Norwegians in Norway don’t eat anymore even though it continues to be a part of the traditional Scandinavian-American holiday cuisine back there in Minnesota. Along with the coffee brewed with eggshells that my Scandinavian-American aunts used to make. And the straw reindeer at Christmastime. And the Swedish meatballs and the mushroom-soup gravy.

Well, maybe the meatballs are still part of the family traditions. But the rest? Our American connections are mostly with Richmond, Virginia these days, not Minneapolis, Minnesota. The racism has been a more visible part of recent history there, even as the demographics have worked to move the politics and practices in the state to a more progressive place. But those statues! And those schools! And those neighborhoods!  And those.……  Well, there is, indeed, a lot to do – and a lot that can be done there.  We support our Richmond-based family and join our voices and our resources and votes with theirs to remove those statues (easy enough, under the circumstances), fix those schools, open up those neighborhoods, and vote! We can do more, starting with criminal justice reform, on police/community relations, but also committing more broadly to promoting and embracing diversity in our lives.

The main challenge, for me, is to identify how to live outside homogeneity. This is a whole lot more than reforms to combat racism. Obviously, we also need to combat racism and especially the inherent historical and contemporary evils of a country that fought a civil war over slavery, embraced a civil rights movement and still didn’t fix the injustice and immorality of it all.  We need to find a path – actually, the many paths – to end racism, to correct the injustices, and to embrace diversity in our lives. This may include reparations of sorts for past wrongs, but otherwise we need a forward-looking set of paths in our housing practices, our infrastructure, our schools and what we teach in them, working with each other in different ways, our leadership, and ultimately listening to each other. These are just a few preliminary thoughts taking me in this new direction. Your thoughts are welcome.

5 Replies to “Personal Reflections on Racism in America”