Experiences in the World of International Organizations

Katherine’s involvement with international organizations dates back to her  teaching and research on the United Nations system as a college professor, fresh out of graduate school.  Her career path took a domestic turn as she played a leading role in her community on women’s rights and in elective politics, but she returned to her interest in international organizations when she was invited to join the International Labor Organization (ILO) as Deputy Director-General.

As a college professor, she taught international and Asian studies and served as faculty adviser for model UN conferences and field trips to the UN itself.  Her PhD dissertation and continuing academic research examined the changing dynamics of decision-making patterns in international organizations. Following her tenure as a state senator in North Carolina, she pursued additional studies in the field of law.  She developed a particular interest in labor and human rights law at both the domestic and international levels . And through her White House Fellowship experience on public civil service reform and her corporate legal experience on civil rights and employment policy, she acquired a practical understanding of the interplay between public policy and human resources practices.

At AT&T her legal responsibilities had mostly involved the legislative process on domestic issues like civil rights or retiree health benefits.  It was a welcome addition to her AT&T portfolio when she was asked to implement AT&T’s decision to engage actively in the negotiations of a labor side agreement for the North American Free Trade Agreement.  Because of her knowledge and interest in international labor issues, this then led to her being invited to join the US Employer delegation to the International Labor Conference. She attended several ILO meetings in this capacity at a dramatically changing time for international labor and structural adjustment issues.

Katherine’s record of close collaboration with the CWA and IBEW, however, distinguished her as an advocate of workers rights, and led to her eventual nomination by the US tripartite committee when the position opened up for the top-ranking American in the ILO Secretariat.  She enjoyed the support of both the AFL-CIO and the Secretary of Labor, as well as her business colleagues.

In her service to the ILO under two different Directors-General, Michel Hansenne and Juan Somavia, Katherine brought her strong commitment to the inclusiveness of all relevant stakeholders, both in the US and around the world.

Katherine also worked with the UN system as a whole for the integration of fair employment policies and participatory processes into broadened international collaboration.  In this capacity, she represented the Director-General in numerous collaborative efforts, not only at the UN in New York or the IFIs in Washington, DC  but also in specific countries – in Nepal, Zimbabwe, Hungary and Chile, just to name a few.

Among the issues that came to the forefront was the challenge of eradicating child labor and especially the worst forms of child labor. Katherine joined with key figures in the Spanish government to launch a special initiative on this issue. The US was very active in this field, and she worked closely with Senators Moynihan and Tom Harkin in their efforts to mobilize Congressional support for action on child labor. She also welcomed the US President Bill Clinton when he delivered a keynote speech on the occasion of a new child labor standard at the International Labor Conference.

As these collaborative efforts were having their impact and taking hold, a second major initiative on the promotion of social dialogue as an articulated objective of the ILO was her main contribution under Director-General Somavia. This was truly compatible with Katherine’s commitment to inclusiveness in international relations. She worked with a great team within the Secretariat representing workers’ groups, employers’ groups, and governmental interests in labor administration and labor relations, as well as sectoral activities. 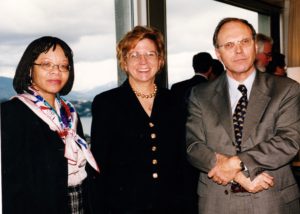 Reaching out to the social partners at the national and regional levels, Katherine promoted the importance of strengthening all parties to engage effectively in both bipartite and tripartite bargaining and collaboration. The experiences of working with partners in places like Chandigarh in India,  Djakarta in Indonesia, Addis Ababa in Ethiopia, and Gabarone in Botswana were an inspiration for her to link them to broadened collaborative action generally. This set the stage for her next career moves.