Discovering the unique character of Lyon in the world  of food was an eye-opening experience for us. Well, a mouth-watering experience, too. And a tasting trip of refined simplicity, although much of it was so elegantly presented that the simplicity of the ingredients could easily have been missed.  And we discovered, too, the strange and somewhat deceptive history of the famed “Mères de Lyon” (Mothers of Lyon).

On a rainy and windy Saturday, when we had planned to do a walking tour of the inner city of Lyon, we awoke to the chill of the dreary morning and decided we had to find something inside to see instead of the walking tour. That’s when I remembered something about two famous chefs associated with Lyon who had recently passed away. One I remembered was quite elderly, while the other had died at too young an age of what I had remembered to be complications from diabetes. I had read about this one and his rise to fame from the simplest of dishes, the mashed potato. And the other one, too, had some kind of fame for simple but definitely “haute cuisine”.

Ah yes, I found the name of the first one and read his obituary again – Joël Robuchon  – named “Chef of the Century” by the restaurant guide, Gault Millau, a rival to Michelin. And, oops, I had mis-remembered. He was 73 when he died, – in August –  and the cause of death was not diabetes but cancer.  Well, I have to admit that I currently think that 73 is still too young an age to die, since I myself am now 74 and don’t like to think of myself as “old”.  And while some sources may not have mentioned diabetes, it was reported that he had to give up his mashed potatoes (or at least the huge quantity of butter in his recipes) when he developed high cholesterol, high blood pressure and high blood sugar. With more Michelin stars than any other chef in the world, Robuchon had come to be most famous for the perfection of his work as well as its simplicity. Although he died in Geneva and not Lyon,  I did recall that he had a significant Lyon connection from earlier in his stellar career.

And the other one?  This one – Paul Bocuse by name – was 91 when he died several months before Robuchon, back in January of 2018.  He died, as reported at the time, of complications from Parkinson’s diseases, but at least he was 91 and not 73. A respectable age, even if we recall that this has been quite a year for sad obituaries. Bocuse died in the same room in the town of Collonges-au Mont-d’Or (near Lyon) where he was born! So this fellow really tied his career to the region even though he, too, was named a “Chef of the Century” or even “the pope of gastronomy” or some such. Again, his fame was associated with simplifying French cuisine, in spite of his concocting the first menu for the flight of the Concorde, the epitome of high class travel, and a famous soup  named after a French president for whom it was first served – La Soupe V.G.E (the initials of former French President Valéry Giscard d’Estaing).

We are, neither of us, followers of gourmet cuisine. We don’t travel around the world in search of Michelin-starred restaurants, but we have friends who do. And we have heard them talk about the likes of Bocuse or Robuchon. And we also did follow the reporting of Anthony Bourdain, another chef whose fame was more closely associated with the kind of culinary travels that we tend to prefer – but who also died in 2018. Shockingly, this one was an apparent suicide in June. Capturing the culture and humanity of a place through partaking of local cooking was an appealing part of the Bourdain approach to food, and we were saddened to learn of his death – this one at the age of 61, which is indeed way too young. Anyway, we also observed that he did report on the Lyon food scene in one of his highly popular travel episodes that brought him into direct contact with the famed Paul Bocuse.

This is a rather lengthy way of explaining how an Internet search of things to do in Lyon produced a famed food market named after Paul Bocuse, Les Halles de Lyon Paul Bocuse.

Not a fancy gourmet restaurant that only takes reservations three months or more in advance, but an actual market. A market with no reservations necessary – and a market like ones we have visited in Vintimiglia or Nice or wherever we might be. So this seemed to be a reasonable indoor activity for the stormy day in Lyon.  Sure enough, our GPS got us there without a hitch from our overnight Airbnb location, and we found a parking garage just around the corner from the market. Luckily, it was actually directly connected to the market. So we happily avoided all the rain to enjoy this alternative to a walking tour.

The market was quite a surprise. First because it was like no other market we were accustomed to strolling about in. All of the stalls were immaculate, but there were no rows of flower stalls (as in Nice) or piles of fresh and unusual vegetables (as in Vintimiglia). Rather these were GOURMET-looking stalls, many of them with counters and stools for tasting the delicacies on offer on site. Shrugging our shoulders, we went ahead and ambled along the aisles before coming across another surprise.

Here was this market, known as “Les Halles de Lyon Paul Bocuse” reflecting an orientation to high-end cuisine, a culinary world that is known for its machismo and famous array of MALE chefs. (Note already here that three male chefs have already been described for this particular musing. So even I am prey to this male bias. There is no way I would be able to name three famous female chefs of today, let alone just one – other than Julia Child – from the past. Oh dear!) Many of you reading this will probably already know that Lyon is famous for the “Mères de Lyon”, but for us this was a surprise.

Right there in that Paul Bocuse Market there was a whole exhibit describing these “Mothers of Lyon” – in French AND English. So yes, these are the famed WOMEN chefs of Lyon. And the display is clearly intended to underline for those of us who are tourists in this famed French city that there is a historical significance to Lyon of this gastronomic phenomenon of a genuinely female touch.

We understand that the most famous of these women chefs is Eugénie Brazier, famed not only because she trained so many of the famous MALE chefs who have acquired worldwide recognition from her base in Lyon but also because she herself ran her own Michelin-starred restaurants right here in Lyon.

An awesome woman, portrayed here with a gathering of her star students.  But as the display showed, she was not alone. Famed women chefs were part of Lyon lore for centuries, although the blossoming period has been identified with the 1930’s when wealthy households with their personal domestically staffed kitchens went belly up. The skilled women working in these domestic kitchens had to find external avenues for their culinary knowledge. Even among the workmen of the silk factories and so forth but with the basic simplicity of everyday meals transformed by these women chefs into truly quality choices.

It is a bit odd that the progeny of this style of cooking by the Mothers of Lyon have been mostly male, but it does seem that Lyon has retained a reputation for strong women as managers of the kitchens of high quality restaurants. There is an interesting article written by an aspiring female chef and food reporter, Rachel Black, about the discrimination she has encountered especially in the domain of French cuisine – EXCEPT for her experiences in Lyon.  Her article on “Gastronomie, Inégalité, Fraternité”, which appeared in Anthropology News in May 2018, describes the absence of any effective protest movement against the male dominance in French cooking but claims that Lyon is different because of the strong women in the culinary world there. Our own reaction to this is that the strong women should have had more impact than just in Lyon, but then we ourselves aren’t the best candidates to have any impact either.  Although we did not stay in Lyon long enough to investigate the restaurant choices offered by any of the current women chefs of local renown, we aren’t the type to book a meal three months in advance.

Meanwhile, we returned to our strolling through this unusual market with a slightly different perspective.

Here are some of the displays, starting with what one might purchase for an entrée (i.e. first course), 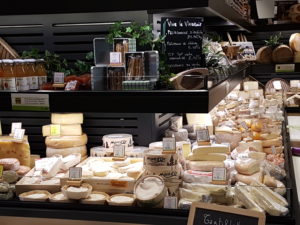 then the plat or main course, the cheeses, and the desserts. 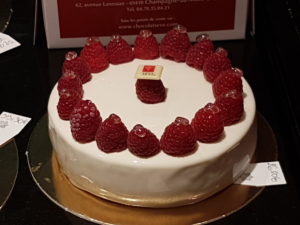 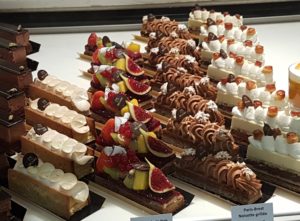 All were impeccably presented with gracious and clearly skilled vendors ready to help with one’s choice of the best to offer. 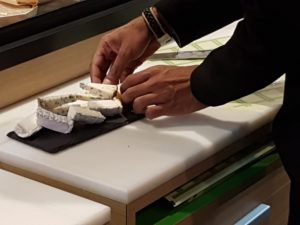 Here is a striking example of someone giving his personalized attention to a cheese tray. Even the one stall featuring fresh vegetables was artistically laid out with each choice neatly and colorfully adding to the overall impression of beauty and quality.

After we had our eyes filled to brimming, we decided to check the beef menu at a booth that featured a spiraling staircase leading to a full-fledged restaurant on the upper floor. We can attest to the superb and simple meal of steak and Lyonnaise potatoes that filled us up so very decadently. And as we slowly waddled our way out of the market, we were pleased to have discovered the distinctive nature and “herstory” of Lyon’s contribution to French cuisine. Even if the female part of the experience was limited mostly to the historic exhibit of the Mothers of Lyon.

Upon leaving the marketplace, we were also delighted to discover that the rain had stopped and the sunshine was out in full splendor. So we were able to conclude our day in Lyon with that walking tour that we had originally intended for the morning. And what a walk that was! As we entered the old town area, we actually came across the steps to another famous Lyon landmark – the Basilica of Notre Dame de Fouvrière.

OK, we said, let’s wear off some of those calories and see where we go. Lots of steps later, and I mean LOTS of steps later, we reached the Basilica. The Basilica itself was interesting but a bit of an anachronism for an allegedly secular France – the newly returned Mayor Bertrand Collomb even describes it as a “treasure of humanity”! But that is another story. We were mostly pleased with ourselves for having climbed so many steps to see the view and to absorb the magnificence and panorama of this remarkable city.  So we’ll be back! We might not go searching for the famed female chefs of Lyon – other than taking a photo or two of their landmark signs. But there is a beauty to the expansive and diverse skyline, and the convergence of two large rivers (the Rhône and Saône) in the center of the city now features an awesome contemporary “Musées des Confluences”.  We’ll definitely be back!