Borders are what you deal with when you have to show a passport to someone to go from one place to another. So what is it about having borders in a “borderless” world? I was attracted to this event at the 2019 Paris Peace Forum with the simplistic assumption that it would be about how to manage borders to facilitate human migration, trade and capital flows. Much to my surprise, the event had been organized to promote the role of borders to keep people apart, and not to manage borders to bring people together! Well, this proves to be a far more fundamental principle of what borders are about than I had put any thought into. So I learned something here.

I was not alone in this. The first panelist at this event, a fellow by the name of Thomas Greminger, Secretary-General of the Organization for Security and Cooperation in Europe, started his presentation by asking the audience to answer an online survey whether they thought that borders are good or bad. The result was 72% against borders! 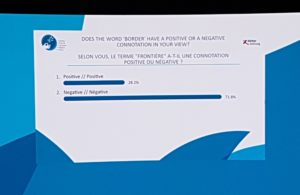 He then proceeded to argue in favor of borders being good. Borders, he explained, should protect but not divide; they should be secure but open; and they should uphold a respect for territorial integrity and the security of people on each side of the border. As other panelists subsequently pointed out, even where one can cross borders easily, as is the case among the Schengen countries of the EU, they constitute a comfort level for how spaces and identities are defined. Although there are obvious transnational issues like climate change or migration or cybersecurity that don’t stop at borders, they can only be addressed by cooperating ACROSS borders, not by ignoring those borders.

So fair enough. I was persuaded. What is more, I was reminded, the central principle about borders in international law is that no change in borders can legally be carried out by force. Although there are territorial conflicts that have erupted into violence and in disregard of this principle, as in Ukraine or the Middle East (or Kashmir, for that matter), the panelists recognized that a respect for borders is an important tool for inclusive dialogue and conflict prevention. In fact, the number of strictly territorial conflicts has gone down since the 1970s, even though the number of states and borders have increased. And thus, in that context, the challenges going forward are not about borders. Rather the challenges are both in the lengthened nature of civil or domestic conflicts within borders (especially in Africa) and in the growth of digital flows that are being used to escalate the cross-border threats of terrorism and trafficking and trade in illicit products. While digital technology has also been manipulated to reinforce domestic nationalist trends, the panelists concluded that international cooperation and political solutions to address these transnational threats can only be determined by an increase in nationally-based discourse.

What a revelation! Any thoughts? I am persuaded, as I said, but maybe not fully convinced. After all, I was long associated with the GLOBAL Social Observatory where we worked to promote multi-stakeholder and multi-sectoral dialogue and collaboration on social issues.  Aren’t there ways for stakeholder groups to form without ties to national entities? And aren’t there examples of successful border-free collaborations?