Katherine was elected for three terms in the North Carolina Senate as a member of the delegation representing Guilford County, including the Cities of High Point and Greensboro. She was the first woman to be elected to the State Senate from this district. She was in the forefront of bringing the women’s movement into the mainstream in American politics. Her success in the NC Senate also showed the importance of teamwork and community outreach.

It was a time when the movement for women’s rights was only beginning to take hold across the country. In fact, she herself had been skeptical of what had been portrayed in the media as a radical movement of feminists hostile to traditional family structures and social systems.

Her views were transformed by a conference she co-organized on the global issues of race, gender and equality that brought prominent thinkers and advocates from around the world to Greensboro. The mingling among these guests with the community participants was a stimulating relevation on the wisdom and practicality of respecting each individual in society and removing the barriers to equal opportunity for all. From that experience, Katherine joined with others in the community to promote local initiatives that could bring everyone together to learn more about whatever barriers there were (for women, to be sure, but also for men) in the community and what could be done about them.

The Mayor of Greensboro invited Katherine to chair a special investigative committee to determine whether and what action was needed to achieve equality for men and women in the community. The committee gathered statistics, conducted surveys and held public hearings to ascertain that there were indeed discrepancies in education, work and social practices. They concluded that no one individual or institution was causing the discrepancies, but all needed to work together to fix them. They recommended a collaborative approach to the Mayor and City Council to act on these discrepancies through a Commission on the Status of Women.

Katherine and her team of active participants on this issue also concluded that a similar outreach was needed beyond the community to the state level. From this base, she announced her candidacy for the NC Senate, and with her team of supporters, she developed a campaign platform on tax reform, campaign reform, health care, education, equal opportunity and environmental protection. Her successful election for three terms was an opportunity to influence public policy at the state level in numerous areas, including equal opportunity, natural resources, government accountability, quality education and criminal and juvenile justice.

As reflected in the campaign brochures below, the approach she took was to emphasize ways to enable everyone to win from revising discriminatory laws or combating environmental degradation or enhancing educational quality.  Note that Katherine’s name was Kathy Sebo throughout this experience and changed her name to Katherine Hagen at a later stage in her professional career. 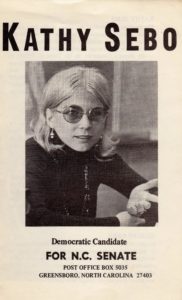 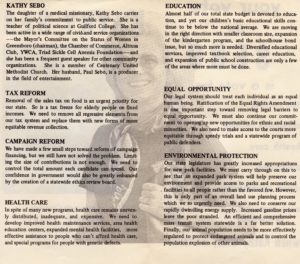