The Comte de Grasse, the one born in 1722 with the given names of François Joseph Paul, was an admiral in the French navy prior to the French Revolution. In fact, this Admiral de Grasse (in French the “Amiral” de Grasse) was the commander of a French naval fleet that played an instrumental role in the victorious ending of the American Revolutionary War against the British. It is by happenstance that a statue in his memory, located in a somewhat isolated part of a plaza in the town of Grasse, France, where we live, has triggered an adventure in search of discovering how his role has been memorialized where it actually was played out – that is, in and around the Chesapeake Bay and the town of Yorktown in the State of Virginia. I recently had the opportunity to engage in this search, largely motivated by what one might do to memorialize  more respectable war heroes, like this one, in stark contrast to the disturbing array of the Confederate generals whose statues permeate that very same State, including the especially infamous Monument Avenue of the State’s capital of Richmond (to say nothing about the controversy over the statue of Robert E. Lee in Charlottesville, Virginia).

END_OF_DOCUMENT_TOKEN_TO_BE_REPLACED

French “laicité” has been around for over 100 years – or more. The current legal framework, dating from 1905, was inspired by a reaction to the Alfred Dreyfus affair that exposed the prevalence of anti-Semitism in the French military, Catholic Church and conservative political elites of the late nineteenth century. In this reflection, I share my thoughts about applying the idea of “absorptive” immigration (as opposed to “integrative” immigration) to the challenges of applying “laicité” today, involving a significantly more diverse population than existed back in 1905. END_OF_DOCUMENT_TOKEN_TO_BE_REPLACED

International Women’s Day is celebrated each year on 8 March. This year’s theme was chosen to be “Balance for Better”.  As a feminist who has supported gender equality in various settings throughout my career, I have found it a useful segue into semi-retirement life to investigate how my local community chooses to celebrate this day. Last year, I was drawn to the artistic rendering of the day in the nearby village of Peymeinade, where I was deeply moved by the impressive exhibit of the paintings of three generations of women artists whose portraits captured the personalities of a representative sampling of women pioneers in history. (See my report of this event here, and a translation into French by the lead artist, Leila Zarif, here.)

This year, I was intrigued by a rather different event hosted by the Soroptimist Club of the Pays de Grasse on “Les Femmes en parfumérie”.  How timely that this colloquium would tackle the challenges and opportunities for women in the perfume industry – just when the Pays de Grasse has been blessed by the UNESCO designation of its unique heritage for perfume. As reported in my commentary about the role of past and future in the work of UNESCO (available here), this designation was only recently approved in November 2018 under the UNESCO convention for protecting intangible heritages around the world. END_OF_DOCUMENT_TOKEN_TO_BE_REPLACED

I was recently at UNESCO headquarters in Paris for the 13th Internet Governance Forum (IGF 13). Little did I know, while wandering the conference rooms and lobby displays devoted to the transformative path of the Internet into the high-tech world of the 21st century, that this same organization UNESCO was hosting a review of applications for the “Intangible Cultural Heritage of Humanity” list.  One thing looking to the future and one thing looking to the past! END_OF_DOCUMENT_TOKEN_TO_BE_REPLACED

Warm greetings to you for a happy and peaceful holiday season and a fulfilling and inclusive 2019. As this eventful year of 2018 comes to an end, we share happy memories of family and friends at Villa Ndio and in our explorations with them of so many “new” sites (for us) near and far from our home base. Politically, too, we reflect on the “blue wave” in our home of citizenship and on “the yellow vests” in our home of retirement as ex pats here in France. Where will we be after the many turning point events of 2019 have brought us to this same time next year? END_OF_DOCUMENT_TOKEN_TO_BE_REPLACED

Discovering the unique character of Lyon in the world  of food was an eye-opening experience for us. Well, a mouth-watering experience, too. And a tasting trip of refined simplicity, although much of it was so elegantly presented that the simplicity of the ingredients could easily have been missed.  And we discovered, too, the strange and somewhat deceptive history of the famed “Mères de Lyon” (Mothers of Lyon). END_OF_DOCUMENT_TOKEN_TO_BE_REPLACED

Learning can come through reminders about what you knew in the past but had long forgotten. This happened to me the other day as I followed my curiosity to see why a memorial exhibit for Martin Luther King, Junior entitled “MLK Après 50” was being featured on 17 to 24 October 2018 at the Palais de Congrès in Grasse. Why would the City of Grasse be hosting such an exhibit on the occasion of the fiftieth anniversary of his death? It was odd, too, for this to happen in October since MLK’s birthday was in month of January and he had been assassinated in the month of April,.  But maybe there was something more to this exhibit than an MLK memorial. Could this mean something about the crosscutting and broader impact of MLK’s legacy for today’s world of racial and ethnic divisions? Even in Grasse?

END_OF_DOCUMENT_TOKEN_TO_BE_REPLACED

“The Comedy of the Model” is a strange choice of words for someone who is used to using the word “comedy” in the prosaic context of stand-up comedians and shows that make one laugh. One can’t exactly say that the recent exhibit at the Matisse Museum in Nice comparing Matisse and Picasso from the perspective of “The Comedy of the Model” was supposed to make one laugh.  So one does need to stretch it out a bit – as in “The Divine Comedy” referring to a poem, for example, or encompassing the idea of “play-acting” in a sort of light-hearted way. To amuse, so to speak, rather than to laugh uproarously. END_OF_DOCUMENT_TOKEN_TO_BE_REPLACED 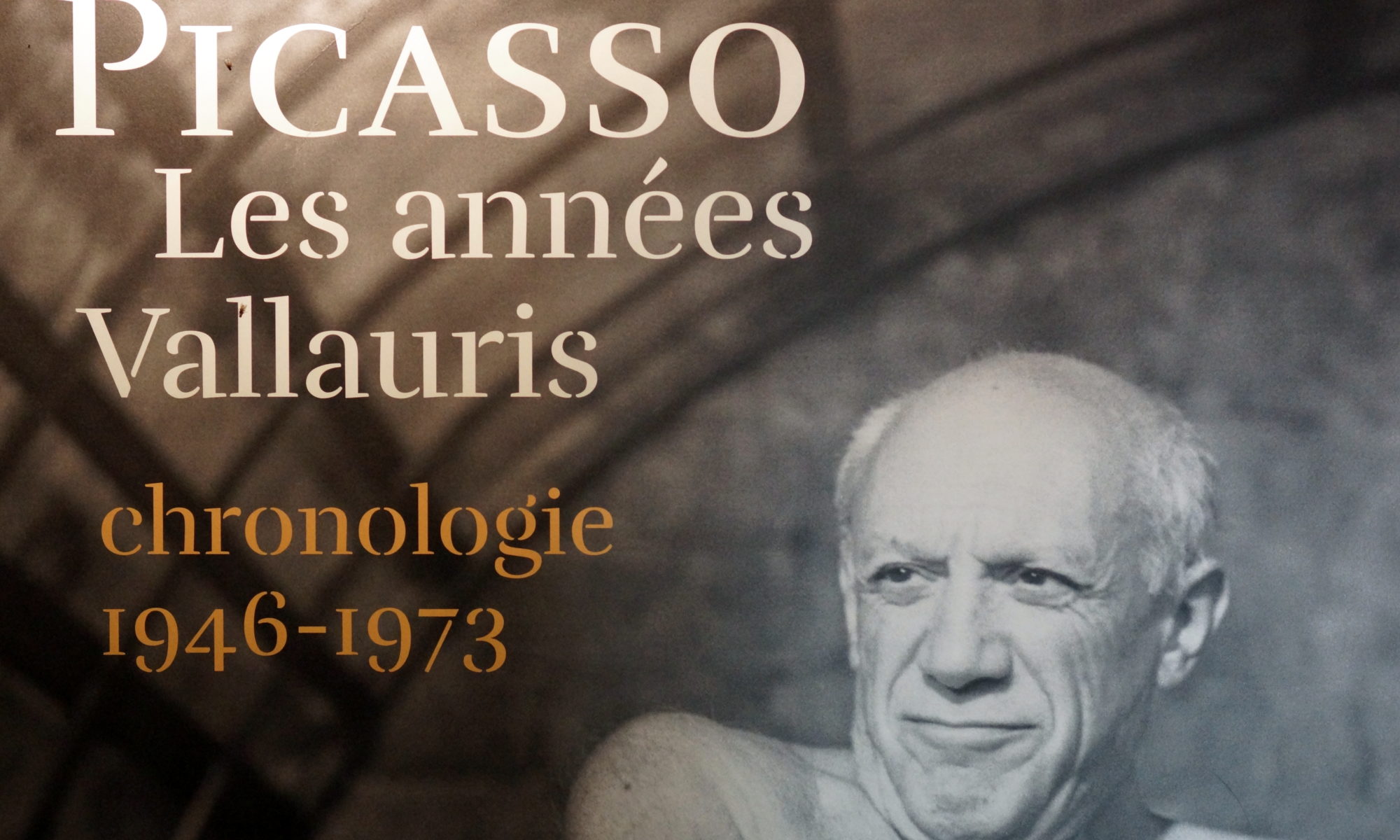 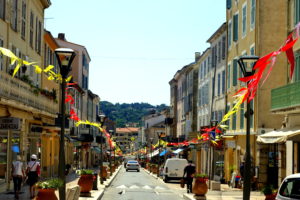 Vallauris has been a favorite haunt of ours for as long as we can remember. Famed for its pottery, the town has had its ups and downs. The walk along its main street, starting with Picasso’s famed statue “L’Homme au Mouton”, his powerful “War and Peace” panorama and a collection of his ceramic works in a museum at the top of the hill, and our personal favorite pottery shop Ardéco owned and operated by Gilbert and Martine Azéma at the bottom of the hill, is a nostalgic one these days. The town seems to be more “down” than “up”.  Without being too disheartening, however, we were “re-inspired” by what we learned from our latest visit (27 June 2018). At the one end, we took in the special exhibit of “Picasso’s Vallauris Years” that is part of a two-year “Picasso-Mediterranée” project running from 2017 to 2019. At the other end, having been saddened last year by the demise of Gilbert Azéma and the closing of his famed Ardéco, we were thrilled to come across the reopened Ardéco under new management.

END_OF_DOCUMENT_TOKEN_TO_BE_REPLACED

Gender equality has been at the forefront of French political debate in recent months, with a series of legislative proposals that reflect a uniquely French approach to both gender and equality.  My musing back in March on gender equality in France was intended to feature the excellent exhibits for International Women’s Day in the nearby village of Peymeinade. One exhibit had a historical perspective of 100 years of the feminist struggle dating back to 1918, while the other exhibit was a delightful mixture of paintings specifically prepared by three local artists for this particular International Women’s Day in Peymeinade. At a reception for this exhibit, Leila Zarif, the lead artist and her artistic daughter and grand-daughter explained their choice of featuring remarkable women whose impact went well beyond feminism per se – Rosa Parks, Simone Weil, Frida Kahlo and others.  The event also included remarks from the mayor about being true to yourself, specifically triggering an appreciation for the “gendered-ness”, as it were, of the French approach to gender equality. Since then, I have been reflecting on my own fixation on the interplay between modesty and provocation that reflects my Anglo-American perspective. END_OF_DOCUMENT_TOKEN_TO_BE_REPLACED