“The Comedy of the Model” is a strange choice of words for someone who is used to using the word “comedy” in the prosaic context of stand-up comedians and shows that make one laugh. One can’t exactly say that the recent exhibit at the Matisse Museum in Nice comparing Matisse and Picasso from the perspective of “The Comedy of the Model” was supposed to make one laugh.  So one does need to stretch it out a bit – as in “The Divine Comedy” referring to a poem, for example, or encompassing the idea of “play-acting” in a sort of light-hearted way. To amuse, so to speak, rather than to laugh uproarously.

Picasso’s art has been the subject of several special exhibits, including one I had the good fortune to see at the Tate Modern in London that featured a single year, 1932, in his long and productive life. (See my “musing” about this exhibit elsewhere on this website.) Closer to home, we have been aware of a far-reaching collaboration around the Mediterranean, called “Picasso Mediterranée”. This project, running from 2017 to 2019, features special exhibits that link Picasso to various parts of the Mediterranean Basin. Collaborating museums are showing special Picasso-related exhibits in France, Italy and Spain, to be sure, but also in Greece, Cyprus, Turkey, Israel, Morocco and Malta. See a regional list of exhibits associated with the project here. And we have made a point of checking out the special exhibits nearby, in Mougins and Vallauris. There is both a separate “musing” by Kathy on the Vallauris exhibit in this section and a photo display by Ralph in the Art section of www.villandio.net.

As admirers of the art of both Picasso and Matisse (see an earlier musing by Kathy on their influence at Villa Ndio), we were especially interested in the special exhibit comparing the two artists that ran through the summer at the Matisse Museum in Nice. We know that some of the other museums have special exhibits linking Picasso to Van Gogh, to the Spanish masters, and to many other artists associated with the Mediterranean, but we came to understand that the linkage between Picasso and Matisse was the most significant of any of these linkages. Sophisticated art experts already know this, but we were very impressed with how this special exhibit brought this out so strikingly.

As we learned from the exhibit, Picasso and Matisse first met in 1906 and engaged through the decades in both rivalry of and inspiration from each other’s works. They exchanged their first paintings in 1914 or thereabouts, and displayed their rival’s works in their studios. Here is the one that Matisse gave to Picasso, which was included in the special exhibit. 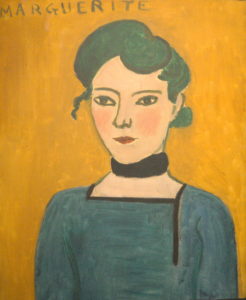 With Matisse falling in love with the light of the Mediterranean and settling in Nice and Vence early on (1918?) and Picasso moving to the South of France after World War II, the dynamics of their relationship came to be associated with the region. And they clearly explored each other’s art in a dynamic way.

The exhibit showed this interplay in a thought-provoking way.  Not only did it emphasize how they influenced each other;  it also illustrated how each one’s relationship to “the model” was itself a basis for their “reflection”, as the museum’s curator Claudine Grammant described it, on “the question of the representation of the body and the creative act”.  Well, yes, this is a major reason why their art is so powerful. Both did pursue the creative exploration of perception, and this did feature varying interactions with “the model”.

The exhibit was organized to convey this engagement with “the model” around four themes – “To Project, To Transform, To Covet and to Posses” and concluded with an”Epilogue”.  The accompanying commentary is a bit heavy for those of us who are novices in the art world, but fair enough. We understand that the greatness of these two artists had to do with their portrayal of “perception beyond just the visual” and capturing the “enigma” of the model. 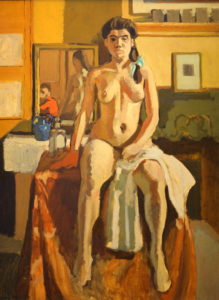 Several of Matisse’s paintings even show the painter himself in the painting, as shown in an example here.

Then there are examples of the transformation of the material, whether in the paints or clay or ink, into a “morphogenesis” of the model, the emotion in portrayal of a sleeping figure (mostly but not exclusively female) and the struggles of possession.  This is where the interplay between Matisse and Picasso gets really interesting. One can see how each played off from the other’s work. Here are a couple of examples. 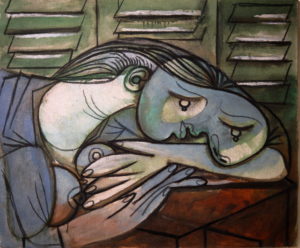 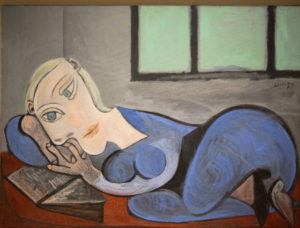 Another interesting illustration of their exchanges has to do with this painting of a chair that Matisse had coveted – flowing lines and colors – that Picasso reportedly disliked (not the chair but Matisse’s painting of it). 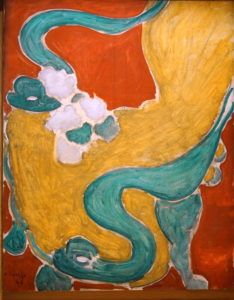 Anyway, the Epilogue shows how moved Picasso was by Matisse’s death in 1954 by his own portrayal of the famous window through which Matisse had become so captivated of the Mediterranean light. He even did a painting of Matisse’s own studio. 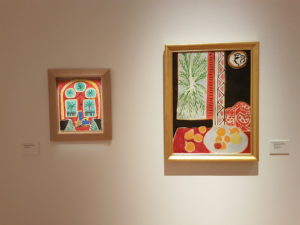 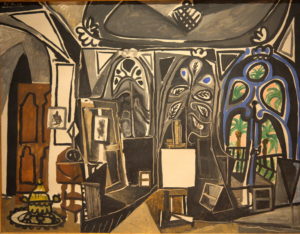 The photos here were taken by Ralph, and there are more from the visit in Ralph’s Art section of this website.   To return to the title of this exhibit, we have ignored until now the rationale for this choice of “Comedy of the Model” as the theme for the exhibit. We conclude this musing by giving due deference to its source.

As explained in passing by the curator Claudine Grammont, this is a phrase associated with a famous French writer, Louis Aragon, who wrote “Matisse, Roman”, first published in 1971. We’re not so sure how many of Aragon’s works have been translated into English, but he was certainly a prolific writer and poet who is well known in French literary circles. We’ll ignore that he was among the literary elite who embraced Communism in the 1920s and 1930s, since that really isn’t what inspired him to write about Matisse. Rather, it was his fascination with the “deviation from the model” in the work of Matisse – but also something more than that.

One can find information here about Aragon’s “Matisse, Roman”, but there is no way to find his use of the term “Comedy of the Model” without purchasing the whole publication – and then only in French. Instead, we rely here on how another author, Domique Vaugeois, a professor of 20th century French literature at the University of Rennes, describes Aragon’s strong affection for Matisse. An Internet search of the professor’s commentary did unearth an analysis of this particular choice of words.

Think about that coveted chair, writes Professor Vaugeois, for it “is not simply the work of distortion and deviation from the model, but the invisible work of the matissian carpentry of dreams, that of the wizard of the rooms that makes flight the armchairs, constantly bloom the flowers, dance the little pots of tin.” Aragon captures this power of Matisse to “sensitize this awakening to the life of objects, this emotional concentration,” writes the professor, such that “the secret chamber of the painter is not quite his painting or his studio, but a mental chamber” capturing the power of the model with its “allegorical value”. See Professor Vaugeois’s commentary here. Forgive me for being selective in quoting this source, but I do sense that this is how I personally come to an understanding of why both Matisse and Picasso were the leading great artists of the 20th century.