Kofi Annan was a team player. How lucky to have been a part of his entourage. I remember the first time I met him. It was in Toronto shortly after he had assumed the position of UN Secretary General. As with so many others who came to know him, I was entranced by his soft-spoken style. And as Deputy Director-General of the International Labour Organization, I was fortunate to have had the opportunity to benefit from his inclusive leadership style.

END_OF_DOCUMENT_TOKEN_TO_BE_REPLACED

In these days when the  American political scene is deeply divided, even when it comes to foreign policy,  there comes along an issue that is often misconstrued because of this divisive atmosphere. And that is the issue of opening the doors to multi-stakeholder collaboration in the area of nutrition. It is regrettable that the US role in advancing this collaboration has been miscronstrued, specifically in the context of US leadership in opposing  a particular resolution at the most recent World Health Assembly that was updating global health policy on infant and young child feeding. As reported by Andrew Jacobs in The New York Times on 8 July, 2018 (available here) and picked up in numerous other media outlets), I believe that the US leadership has been incorrectly described as being opposed to breastfeeding because of its opposition to this resolution. The headline even suggests that the US action “Stuns World Health Officials”.

The article, which was widely circulated, describes US intervention on a resolution that was ultimately adopted at the annual gathering in May 2018 of the World Health Assembly (WHA), the chief governing body of the WHO.  My personal view is that this effort to condemn the US actions has actually been influenced largely by opponents of an inclusive multi-stakeholder platform for infant and young child nutrition. Whatever the rationale might have been for the US to do what it did, I believe that the critics have misrepresented the impact of the US position.

END_OF_DOCUMENT_TOKEN_TO_BE_REPLACED

The commentary for this first week of March was intended to focus on the various controversies and advances on gender that are being featured around International Women’s Day. In spite of the turbulence with which this month has opened (in both weather and trade politics!), it is still timely to touch on a number of these developments – especially since we can cheer the momentum leading to a declaration on gender and trade at the WTO.  See photo below from a panel at the WTO just one year ago.

The theme of this year’s International Women’s Day is also worthy of some attention – “The Time Is Now: Rural and Urban Activists Transforming Women’s Lives”. But this has all been upended by a more fundamental challenge to today’s global rules-based trading system, having to do with a trade war invoking “national security” on steel and aluminum. So first a few words on that – and then back to the gender theme – which includes reflections on the encouraging developments in gender-based activism involving trade policy but also on the burgeoning allegations of sexual harassment that are spilling over into the UN system and major global NGOs. Will they bring a major behavioural change? Read more here. END_OF_DOCUMENT_TOKEN_TO_BE_REPLACED

There is a scene in the film Alice’s Restaurant, one of those anti-war films from the Vietnam War era, where an overly zealous police officer brings “27 8X10 color glossy photos” of a minor crime scene (the unlawful dumping of garbage) to a court proceeding presided by a judge who turns out to be blind.  It is a tale of overstating the seriousness and engaging in too many steps to prove the crime.  The photos have no use to the judge, who then levies a $50 fine on the defendant.  We understand that the main characters here – the “criminal”, the judge and the police chief all play themselves in the film, which contributes to its ironic punch.  The film was built around a folk song about a “massacree” at this same “Alice’s Restaurant”, performed by Arlo Guthrie (the “criminal”), describing a Thanksgiving gathering with a bunch of bohemians in an abandoned church in small-town New England.  END_OF_DOCUMENT_TOKEN_TO_BE_REPLACED

The World Health Organization has been caught up in a real mess by trying to categorize and create hurdles for collaboration with the growing number of non-State actors that are active in public health matters related to the mission of the WHO.  The complexity of this mess was in the spotlight at the recent WHO Executive Board, meeting from 23 to 27 January 2018.  Several agenda items touched on the issue, including ongoing attention to addressing the challenges of non-communicable diseases for healthy lifestyles. More knotty agenda items, however, had to do more directly with WHO’s relations with non-State actors – both its new but yet to be implemented basic Framework of Engagement with Non-State Actors (FENSA) generally and its guidelines for managing conflict of interest in the nutrition world more specifically.  The outcome of the deliberations on these agenda items is rather encouraging, and we hope that the new Director-General will actually clean up the mess.

END_OF_DOCUMENT_TOKEN_TO_BE_REPLACED

We live in a world of ever accelerating change, driven by the creativity of individuals and groups. In this context, it is useful to reflect on the role of innovation as a stimulus for creativity. We focus our attention here on innovation, and specifically on how innovation is being interpreted to be “at the heart” of the policies, services, information and cooperation of the World Intellectual Property Organization (WIPO). Our interest is primarily directed to reflecting on how the trends reported by WIPO in measuring innovation and intellectual property are symptomatic of – and possibly even contributing to – the dramatic shifts in the geopolitical landscape. These shifts are having significant spill over effects beyond WIPO and especially, in these remaining days of 2017, at the World Trade Organization but also, if one looks to the opening days of 2018, at the World Health Organization. END_OF_DOCUMENT_TOKEN_TO_BE_REPLACED

We have long been a fan of the Internet Governance Forum as a leading experiment in inclusive multi-stakeholder engagement at the global level. In our last newsletter (11 December 2017), we wrote an anticipatory commentary on the 12th IGF, which was meeting in Geneva from 18 to 21 December 2017. We had the opportunity to mingle with IGF delegates and to attend a few of the over 230 sessions that were held over five days (the official four days but also an extra day “zero” on 17 December to help deal with the overload). As usual, we came away with the impression of multiple voices – or sounds, as it were, like the warming up of an orchestra before the conductor comes on stage. END_OF_DOCUMENT_TOKEN_TO_BE_REPLACED

The 2030 Agenda for Sustainable Development was the pivotal event of 2015, a year advertised for its transformational summits – on disaster relief in Sendai, on financing for development in Addis Ababa and on climate change in Paris. One might have assumed that the euphoria of the 2030 Agenda would translate directly into implementation strategies in 2016. While one could argue that it was premature to expect such an immediate shift to the new ways of thinking that the 2030 Agenda called for, 2016 also proved to be the year for catastrophic political events which effectively slowed down any hints of first steps. END_OF_DOCUMENT_TOKEN_TO_BE_REPLACED

The Global Social Observatory (GSO) concluded its operations as a non-state actor based in Geneva, Switzerland with a “celebratory” interactive dialogue on Tuesday, 19 December 2017. The GSO mission has been to facilitate an inclusive dialogue in a neutral forum for people to listen to different points of view and to engage in a search for common solutions. Trade and labour standards, HIV/AIDS and social responsibility, gender and trade, collaborating on non-communicable diseases, preventing and managing conflicts of interest on nutrition, and breaking the silos for disruptive action against hunger are examples of the issues that the GSO has taken on since its founding in 2004. The Management Committee has decided that it is time to move on, with confidence that the friends and supporters of the GSO will take the lessons learned from this collaborative experience in the multiple new directions that are opening up for transformative change today. 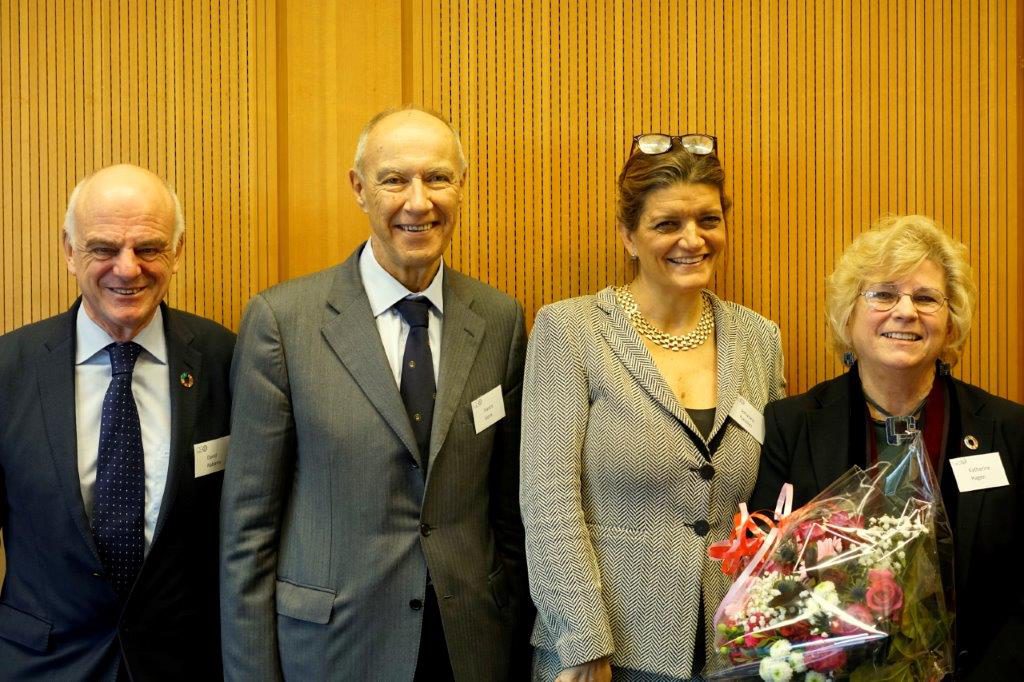 END_OF_DOCUMENT_TOKEN_TO_BE_REPLACED

We signed up for the 2017 UN Forum on Business and Human Rights with some trepidation because of its chosen theme of “Realizing Access to Effective Remedy”.  This is the third pillar in the UN Guiding Principles, supplementing the guidance on state duty to protect human rights (the first pillar) and on the business responsibility to respect human rights (the second pillar).   The third pillar, recognizing the importance of having effective remedies to human rights violations, has been deemed the weakest pillar but one that seemed to evoke the most complaints in past forums.  Much to our surprise, the 2017 Forum and its thematic focus went more smoothly- and more constructively – than we had expected.  Read more here. END_OF_DOCUMENT_TOKEN_TO_BE_REPLACED