I am an American expat living in France. I have been inspired by the wave of protests against racism and racist violence in the US and its spread around the world. In many of the protests outside the US, the support for Black Lives Matter is being linked to concerns about racism in their own countries. One can even say that racism is a global problem. The American  experience with racism, however, gives us a focus on discrimination and inequality that is different from what people experience elsewhere. Nowhere is this more strikingly different than here in France.

There is a dominant culture here, too, just as there is in the US. Maybe not the same as the homogeneity that so effectively whitewashed everything in the American childhood recollections that I described in my musing on racism in America.  But there is an underlying assumption that everyone is French, an insistence that everyone here is a “citizen of the Republic”. This claim conflicts with the obvious presence of ethnic, cultural and religious diversity, but the diversity one sees in France is clearly not the same as the variety of cultural identities in the US. Here in France there are no “hyphenated French”, as the saying goes. No one in France would say something like “I am a Norwegian-American or a Hispanic-American or a Black-American”.

Linking Back Lives Matter to France

It was gut-wrenching to watch the video of George Floyd’s murder, and it continues to be so painful each time it is replayed that one has to turn one’s head away. The image of police brutality has become a message of the depth of racism that permeates us in ways we had never quite realized. The murder of a human being, but not the first. George Floyd in Minneapolis on this most awful May 25th, but the names start rolling and keep rolling off the memory banks (and further shocking us with the killing of Rayshard Brooks in Atlanta) – Breonna Taylor in Louisville, Ahmaud Arbery in Atlanta, Freddie Gray in Baltimore, Trayvon Martin in Miami Gardens, Eric Garner in New York, Michael Brown in Ferguson, Adama Traoré in Beaumont-sur-Oise….Wait a minute. Adama Traoré? Beaumont-sur-Oise?

Yes, the shock of the one stirs up the shame of the many – and not just in the US. Adama Traoré was a 24-year-old Malian Frenchman – that is to say, a Frenchman whose family came from Mali – i.e. no hyphen. Living in one of the suburbs (banlieus) of Paris. On 19 July 2016, he was out with his brother when some police officers approached them to apprehend his brother. He fled the encounter because he did not have his ID card with him, and the police chased after him. They then apprehended him and subdued him by pinning him down. They took him into custody where he died. A coroner’s report asserted that he died of heart failure, but an independent investigation confirmed death by “positional asphyxiation”.  Does this sound familiar? Well, the French officials do argue that the two cases are different, as one would expect.

Since 2016,  meanwhile, Adama’s sister Assa Traoré has been leading a protest movement  in his honor against police violence.  When the recent protests over the wrongful death of George Floyd  spread across the world, the similarity to what happened with Adama Traoré  was an understandable link. Thus, the protests in Paris and across France have been in support of both the Black Lives Matter in the US and Justice for Adama Traoré and against racism in both countries. (Photo below is from Le Parisien.) 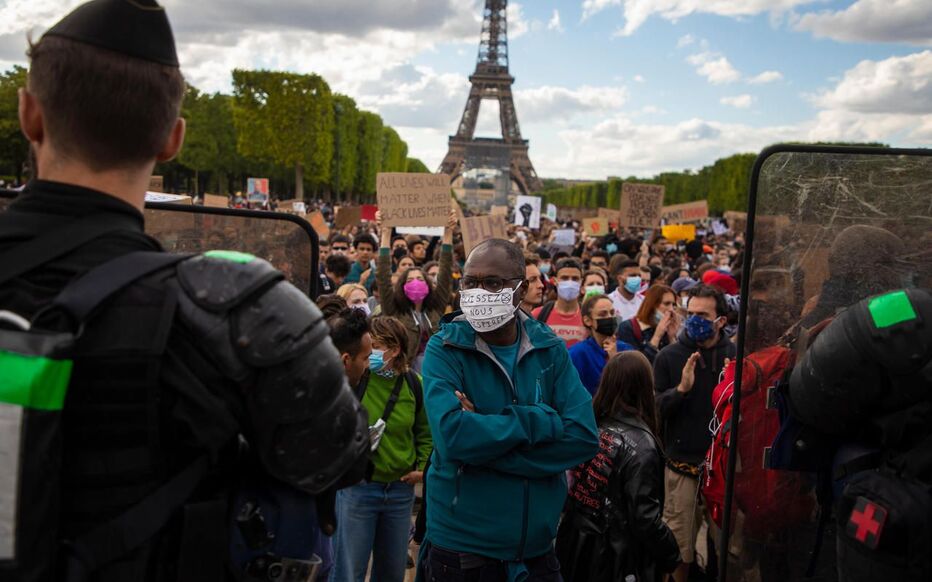 Personal Impressions of the Race Debate in France

In France, however, there is a resistance to classifying anyone by race – or religion or ethnic origin or even gender. I learned this the hard way a few years ago when I proposed a project on promoting diversity to a French observatory that I was working with on global social issues.  I was reminded very pointedly  that French law prohibits the gathering of statistics by race or any of these other distinguishing features. The French message is that the principles of liberty, equality and fraternity mean the same thing for ALL French citizens. Diversity as such does not fit into that message.

But there are other groups documenting the prevalence of both racism and antisemitism, as well as Islamophobia. What is interesting for me to learn is that there really needs to be a better understanding of the full range of that French diversity. The focus currently is on racism and police brutality.  Thus, a recent report from the National Centre for Scientific Research has documented that informal but real racial profiling not only exists in French law enforcement; but it appears to be even more extreme vis-à-vis blacks (11.5 times more likely than whites to be stopped) than it is vis-à-vis Arabs (7 times more likely to be stopped). In the immediate area where we live, this comes as a bit of a surprise. The assumption here has been that there is more anti-Arab sentiment than anything else. To hear about anti-Black sentiments is a revelation. So one of the immediate tasks for me is to delve more deeply into the data – if one can find it.

A related concern of mine is to understand the historical contributions to the apparent diversity in French society that supposedly does not exist.  France, like many European countries, has a long and murky history of colonialism, with a considerable amount of conflict. Again, my own personal perception has been that the Arab/Berber history of France has been more conflict-ridden than its history in sub-Saharan Africa.  But this, too, is being challenged by these recent protests.  It seems that the experiences of the French colonization of sub-Saharan Africa were more entangling, if not more conflictual, than with any French presence in the Middle East or North Africa.

I do have a personal example to illustrate this. While working with the ILO, I did spend some time attending conferences and touring projects in the Francophone countries of Senegal and Cote d’Ivoire (i.e. former French colonies). On one occasion I was vividly confronted by the demands of a group of French soldiers to take over the hotel pool at 6:30 in the morning when I was trying to do my laps. And that was just weeks before a coup in that country – a coup which I later learned had supposedly been delayed to ensure stability during th ILO conference that I was attending. So what were those French soldiers doing there?

This experience reinforced my impression that the French are still very much involved in their former West African colonies.  News reports of a French military presence in West African countries are fairly common. And one could also witness the strong links with Africa when France won the World Cup in football in 2018. That is to say, this is another vivid example of the many  “officially non-hyphenated” French with African origins in France itself – all still suffering from racial profiling without the documentation to prove it. I haven’t yet seen the 2019 film Les Misérables, but I am looking forward to learning more from that and other widely available sources.

Recent Developments in the French Debate

The latest positions and proposals from members of the Macron government have displayed the difficulties of living with this French lack of documentation.  On the one hand, there were proposals from the French Minister of the Interior, Christophe Castaner  to ban police training and use of choke holds, to suspend officers with “proven suspicion” of racism, and to increase the mandatory use of body cameras.  And in an article published in Le Monde, the official French government spokesperson Sibeth Ndiaye, even called for a dialogue on the merits of collecting statistics on race.  She, a French woman born in Senegal, expressed the view that France suffers from a “form of racism impensé”.  “We must not hesitate,” she continued, “to say that skin color is not neutral”.

On the other hand, these proposals have stirred up the public dialogue against any “identity” politics in France. Police unions are protesting both against Mr. Castaner and against the protesters, and objecting vehemently to the accusations of police violence. And political candidates in the French municipal elections (to be held on June 28) are publicly rejecting racial statistics as being more “risqué than utile”.

So it was not a surprise that President Emmanual Macron backed off from supporting either Mr. Castaner or Ms. Ndiaye in his latest speech, delivered to the nation on June 14th.  The speech was his fourth one on COVID-19, but he also spoke about the issues underlying the protests (without specifically mentioning the protests themselves). He urged the French to “unite around Republican patriotism”. This is because, he said, “We are a nation where everyone- whatever their origin and religion – can find their place”.

Although he did acknowledge that racism did exist on the fringes, he called on France to be “uncompromising in the face of racism, anti-Semitism and discrimination”.  (Note here the addition of anti-Semitism, something that is of particular concern in Europe, including in France.)  The President also praised the police for maintaining law and order and further emphasized that the French “will not take down any statues”. Yes, he agreed, the French do need to have a dialogue, especially with its former French colonies in Africa, but the “republic will not erase any trace or any name from its history”.  (See President Macron’s speech here. )

The French may be exceptional in their insistence that everyone in France is a citizen, but they do have a similar history to other Europeans in terms of the lingering effects of their colonial past – and discriminatory treatment in their colonies. And anti-Semitism is another very sensitive part of that European history. There is even a stronger element of resistance to using the term “race” to define any ethnic or religious group. But the French alternative of using geography rather than race for any analysis of profiling is a bit of a stretch. At least from my  American point of view.  This is definitely a debate to be continued.